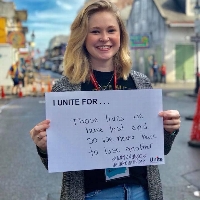 For many, a world without bleeding disorders is simply a dream. Thousands of kids and adults affected face internal bleeding, costly treatments and lifelong infusions.

Everyday Team Kauz is getting closer to reaching our goal. There is currently no known cure for bleeding disorders - meaning that roughly 1% of the United States population are living with a chronic bleeding disorder with no cure insight.
Throughout the 70's - 90's the bleeding disorder community thought the new miracle treatment for hemophilia and other rare bleeding disorders would save lives - instead it became a death sentence for nearly 10,000 Americans. In the 1980's nearly 90% of Americans with severe hemophilia became infected with HIV or hepatitis from contaminated blood-based medications.

Why Team Kauz? My cousins were 3 of those 10,000 individuals who contracted a life taking disease and passed away.

My goal is to continue to advocate EVERY DAY until there is a cure and the last life taking bleed takes place.

Will you help me?